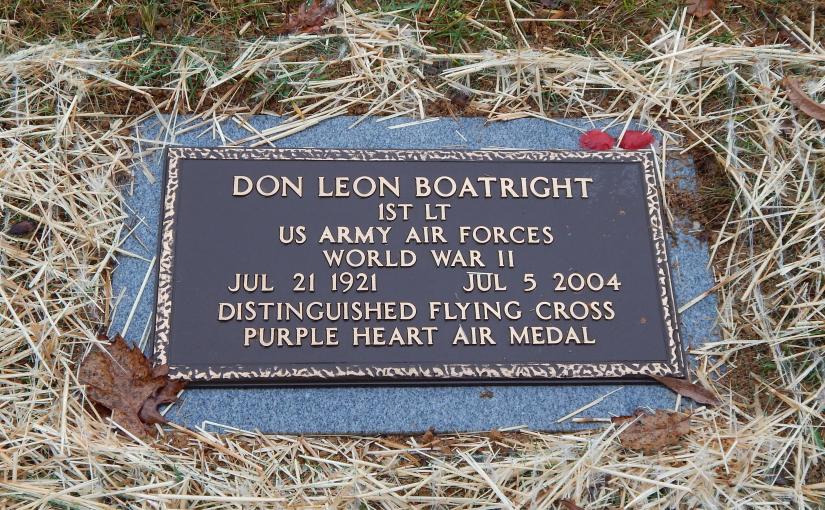 While Memorial Day serves to honor those who fell in battle, fighting for freedom and country, I chose to also share today remembrances of those family members who have passed from our lives but who did not necessarily die in battle. Other than my Great-Great-Grandfather, Irvin Boatwright, who died at age 22 serving in the Civil War, Illinois Regiment 111, Company I, my other relatives who served came home.

Had my father not returned, I wouldn’t be here. However, he was within a nano second, a mere fraction of an inch, from not coming home. A member of the 363rd Squadron, Pied Pipers, he was flying his P51 Mustang, Destiny’s Tot, on a bomber escort mission to Germany. A shell entered the cabin of the P51 on his left and exited on his right, ripping open the canopy and embedding shrapnel into his left eye and face. He flew back to England, landing exhausted and bloodied in the mangled plane. He permanently lost the sight in his left eye. Over the years, when asked how he managed that feat, his only reply was, consistently, “Well, I wasn’t going to land in Germany.

In my recollection of growing up and as an adult, Dad didn’t talk about the war, at least not with us; that was reserved for his fellow Army Air Force buddies during their reunions. What he did talk about was his memories of his friends, his leisure time during his training, and his love of England and her people, which by proxy, he instilled in me. He always wanted to go back to England to visit but never got the chance. What I do remember very clearly, other than some of his favorite anecdotes about eating Brussels sprouts in everything, traversing the streets of London with one eye bandaged, and his great affection for the people of the United Kingdom, was that he never held animosity toward the common people of Germany. I never heard him say a negative word about the everyday, ordinary people, who in many ways were just like us.

I think he would find it disturbing and sad that our country is now so divided, herding people together into this group and that bunch. Division is anathema to the United States, its people, our reason for being. United we stand, divided we fall. This idea isn’t just a quaint saying and it isn’t unique to some patriotic speech by a long ago American soldier or statesman. The dangers of failing to band together date all the way back to Aesop, who lived during the sixth century B.C. See his fable The Four Oxen and the Lion. The oxen were able to hold off the lion together, but when the squabbling began and the oxen separated…well, you can figure out what happened. Why can’t we learn from history?

I bow my head to all those who served and died in the wars of the past. In their honor, I wish we could stay together. Let’s work together, among other Americans and the people of our allied countries, to prevent the throngs of the dead being honored on Memorial Day from swelling by the thousands every year.

One last thing. If you know of a veteran who doesn’t have a memorial like the one pictured here, they are provided free by the U.S. Government. The family may choose from various types of headstones, markers, and medallions. A base must be provided, but the plaque, its delivery, and installation on the base are free. For more information, go to: https://www.cem.va.gov/hmm/.

A good chunk of my time growing up in southern Indiana was spent reading books; all kinds of books, but especially mysteries. In spite of various earlier occupations in my life, I have worked as a Registered Nurse for a couple of decades. Among my passel of hobbies, one of my favorite is genealogy. I started pestering busy adults with questions about my family history when I was twelve years old. Over the years, I have dug through family papers and photos, scrolled through and squinted at faded and tattered microfilm, traveled to distant places in search of crumbling documents, and spent countless hours in cemeteries searching for stones. I was lucky enough to experience the thrill of discovering and uncovering the markers of some very long lost ancestors. After a recent move, I decided to take a break from Nursing and write. My first two books, Poison Branches and Buried Roots, are part of the Perri Seamore series of mysteries with a genealogical slant. View all posts by Cynthia Raleigh